Well, we’ve reached the end of this long journey… the final sneak preview.  As we all know, I have mentioned several release dates which have come and gone.  I admit that I underestimated the amount of time needed for a release of this magnitude.  It’s easy to predict a release date if you are just modifying existing code… but writing everything from scratch to use the latest technologies is a different story.  So I’m not going to predict release dates anymore, but I will discuss some product release information at the end of this post.

And now for the final sneak preview…

One of the most common comments we’ve seen (after “When is this going to be released?”) has to do with the size and speed of the new version.  We’ve all seen (and probably bought) programs that claimed to be the next great thing, only to find that it was bloated and slow because it was based on a framework like .NET, or based on some huge database engine that had to be installed on the computer before the program could run.  (Note to .NET programmers… we know there is a place for .NET and large database engines… it just isn’t in genealogy software.)

Well, we don’t roll that way here at RootsMagic.  RM4 is a native Windows program (no .NET bloat), and uses an embedded database engine (no huge database engine required to be installed on your computer).

So what does this programming jargon mean to you?  It means we are able to add one extra feature that other bloated programs will never be able to copy… RootsMagic-To-Go. 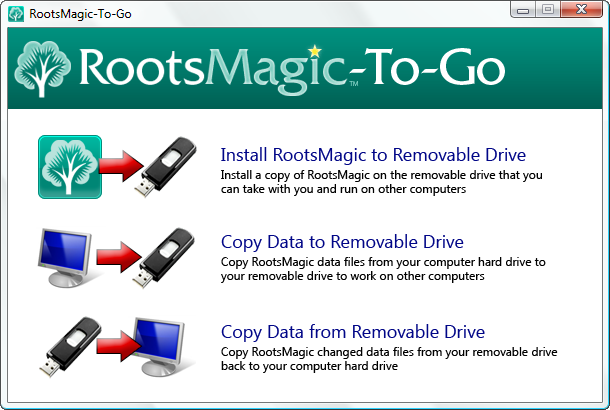 That’s right.  Not only can you have your data on a flash drive, but you can run the full RootsMagic program and your data directly from the flash drive.

So what comes next?

Next week we will release a community preview to those RootsMagic users who have signed up.  This will let us get RM4 into the hands of thousands of RM users who can help us track down any of those issues that pop up in a completely rewritten program.

After the community preview we will release a public beta to anyone (RM user or not) who is interested in taking a look at RootsMagic 4 before the official release.

So that’s the schedule.  Keep checking the blog as we announce these various steps towards the release of the most exciting product in our company’s history.