Once RootsMagic 4 and RootsMagic Essentials were out the door, we tried to concentrate on upgrading the software and adding new functionality.  But we were hearing from our users that they wanted to be able to take their data on their new tablets they’d gotten for Christmas. The only problem was that we had no programming skills on tablets, either iOS or Android.

Rather than hire new programmers just to write apps, we decided to outsource them.  We got a bunch of bids from companies all over the world, but finally ended up selecting a local company here in Utah.  We knew that genealogy software is actually very complex, and this company was actually already familiar with RootsMagic and genealogy software in general.

If you’ve ever hired out programming, you know it can get very expensive.  And we were faced with the decision how to recover the costs of creating these new apps.  In the end, we decided to leave them as read-only to keep our costs down, and to make them available for free.  We released our iOS app in Dec 2012, and didn’t know it would take another year of development before we could get the Android version out. 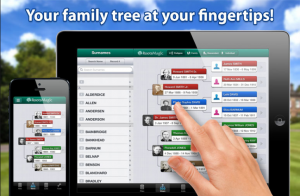 Back when we released RootsMagic 4 we assumed we’d never have to rewrite the program again.  But as we got more and more requests for a Mac version it became clear that we might get to do just that.

So in the summer of 2014 we began rebuilding RootsMagic so that we could compile natively to both Windows and Mac.  But having done this multiple times, I knew firsthand how long it could take, and the Mac users were getting more and more vocal.  So as a temporary fix, we contacted a company called Codeweavers that wrote software to let Windows programs run on a Mac. We had them build a custom wrapper for RootsMagic, and in September 2014 we released MacBridge.

Since we had to pay Codeweavers for every copy of MacBridge we distributed, we sold it as a separate program so we could keep track of the numbers.  The MacBridge program allowed you to install the Windows version on your Mac, but the process was somewhat unwieldy, and it was hard to explain to users how it was supposed to work.

We decided we needed to simplify this whole Mac “wrapper” thing, and worked out a license with Codeweavers where we could pay a flat amount every month and be able to distribute unlimited copies.  This not only allowed us to create a “RootsMagic for Mac” standalone installer, but also meant we could distribute free RootsMagic Essentials with the wrapper as well. And yes, we continue to eat the cost of that monthly license to this day 😉

While we continued to work on the new Mac/Windows version, we decided to release a new version of RootsMagic based on the older code with some exciting features we had been working on.  RootsMagic 7 included a new feature called WebHints, which would display hints from FamilySearch, MyHeritage, and FindMyPast, and let you click on a little lightbulb to jump to those sites to see the hints.  We also announced MyRootsMagic, where registered users could easily post free websites of their family tree.

Then in December 2015, Ancestry dropped a bombshell that they were discontinuing their Family Tree Maker program.  About this same time they contacted us and asked if we were interested in working with their API and integrating RootsMagic with Ancestry.  Of course we jumped at the opportunity. I had been asking Ancestry to work with their API for years without any luck, so this came as a very pleasant surprise.  After crossing all the T’s and dotting all the I’s, we jointly announced that we would be working together on February 2, 2016.

We tried to be as transparent as possible about progress on the Ancestry features.  Normally we wouldn’t pre-announce a new feature, but in this case Ancestry wanted it to be known that we were working on this functionality.  So it left us open to a lot of second-guessing by users as the development went past our estimated release.

During the latter part of development, I started growing a beard and started joking that I wasn’t going to shave until the Ancestry features were released.  Finally, on June 28, 2017, we announced to the world in a short live video from our “secret underground laboratories” that it was finally here.  It was kind of a ridiculous video, but was also kind of an emotional release from all the hard work we put into those features.

After releasing the Ancestry integration it was tempting to just take some time off, but we knew we needed to get back to work on RootsMagic 8 since it had been pushed to the back burner for a year and a half.  We also knew that we needed to release an update to our Personal Historian software which we had been working on prior to the Ancestry announcement.  The update was already close to ready, but we hit a little snag with the main new feature, importing from Facebook.  In order to import from Facebook, we were required to submit the program to Facebook.  Normally that would have been a simple procedure, but Facebook was in the news for allowing companies to take users data and use it in ways the user didn’t want.  Facebook cracked down on accepting new developers with products that could read data from Facebook.  We were finally able to get approved since we were able to show that we (RootsMagic) didn’t get the data ourselves; that the data was simply downloaded onto the users own computer.  At first we were concerned about releasing an update that read from Facebook, but then we realized we actually were providing a feature that Facebook users needed… the ability to get a copy of all of their data downloaded onto their own computer.  Personal Historian 3 was released in March 2018.

So where are we today?  And what does the future hold for RootsMagic?  When we started this blog years ago, the main purpose was to give a sneak preview of our soon to be released RootsMagic 4, and for the next little while we’re going back to those roots to give you a peek at RootsMagic 8.

Of course everyone wants to know what new features will be in version 8 (we all like new features).  And while we’ll have new features, let me just say that  RootsMagic 8 is being designed with our current users in mind, simplifying existing functionality, reducing “clickiness”, and other improvements requested by users.  Underlying code is being redesigned to provide us with a framework for additional functionality in the years to come.

So stayed tuned to this blog as we begin to unveil the most exciting version of RootsMagic ever.