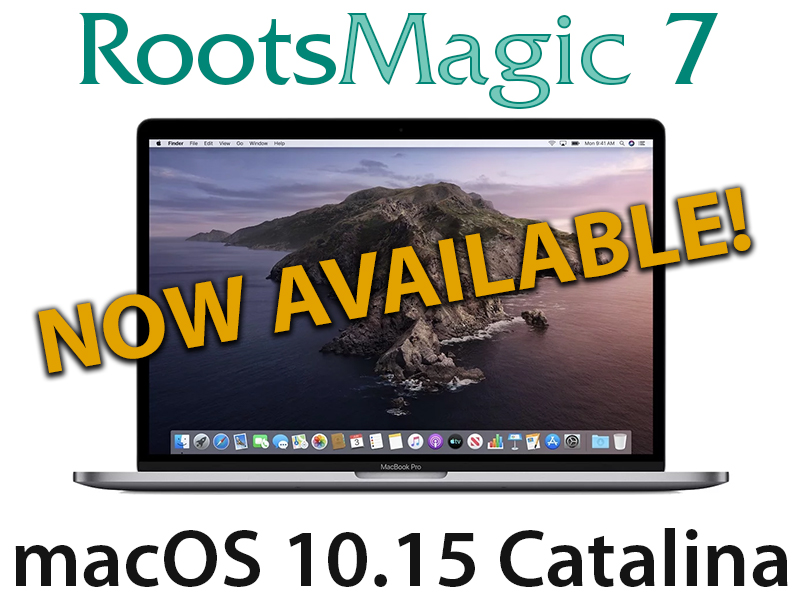 We are pleased to announce that RootsMagic 7 is now available for Apple computers running macOS 10.15 Catalina. When Catalina was released last October, it required all applications to be 64-bit applications. This, unfortunately, broke the wrapper that allowed RootsMagic to run on macOS. While users with previous version of macOS could still use RootsMagic, users who had upgraded to Catalina found that RootsMagic (and many other software applications) stopped working.

After much work and testing, the wrapper for RootsMagic 7 has been updated to 64-bit that allows it to run on Catalina, as well as prior versions of macOS.

Users who installed a previous version of RootsMagic 7 on their Mac should uninstall RootsMagic before installing the new wrapper. Full instructions are found here.

Those users that are installing RootsMagic 7 on their Mac for the first time may download it here.

In addition to the updated wrapper for RootsMagic 7, we are hard at work finishing up RootsMagic 8.  Version 8 is a fully-native, 64-bit macOS application and runs great on macOS Catalina. Keep watching for more news about RootsMagic 8.